For the latest updates on our shows and concerts, please take a look at our Facebook page.

I LOVE YOU BECAUSE 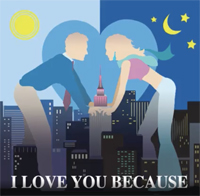 Set in modern-day New York City, with a nod toward Jane Austen's Pride and Prejudice and the exploration of what attracts people to one another, this hilarious musical is the story of a young, uptight greeting card writer whose life is changed when he meets a flighty photographer. Along with their friends and siblings, they learn to love each other not in spite of their faults, but because of them.

I Love You Because takes its inspiration from American situation comedies such as Friends and How I Met Your Mother and integrates it with modern musical theatre. The wonderful thing about this 6-hander, is that it still has the one-liners, eccentric characters, and domestic quirkiness of a TV comedy but with songs - great songs.

Not suitable for those aged under 15 (contains infrequent strong language).

THE SOUND OF MUSIC 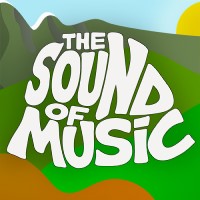 Lyrics by Lindsay and Crouse Fain
Music by Rodgers and Hammerstein

The Sound of Music is considered to be the world's most beloved musical. The original Broadway production starred Mary Martin as Maria and won five Tony Awards in 1959 including Best Musical. It then went on to cinematic history with Julie Andrews in the starring role. The show features some of the most delightfully infectious songs of all time by songwriters Rodgers and Hammerstein and Librettists Lindsay and Crouse.

When a tomboyish postulant at an Austrian Abbey proves too high-spirited for the religious life, she is dispatched to serve as a governess in the home of a widowed naval captain with seven children and brings a love of life and music back into the home. They fall in love and marry, but upon returning from their honeymoon, they discover that Austria has been invaded by the Nazis, who demand the captain‘s immediate service in their navy. The family’s narrow escape over the mountains to Switzerland on the eve of World War II provides one of the most thrilling and inspirational finales ever presented in the theatre. The unforgettable score features some of the most memorable songs ever performed on stage, including Edelweiss, My Favorite Things, Do-Re-Mi, So long, Farewell, Climb Ev’ry Mountain, and of course, the title song, The Sound of Music. The show is guaranteed to win your heart!

We are continuing to follow all government guidelines around the COVID-19 pandemic. We keep all members of our Society and the general public informed of all developments as soon as we can.

If you have any ticket queries please contact the relevant theatre.

Thank you for your understanding and support in these challenging times.

DO YOU HEAR THE PEOPLE SING? 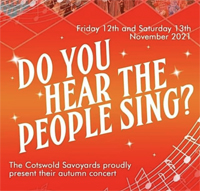 The Cotswold Savoyards present an autumn concert, a wonderful, fun-filled evening of musical theatre favourites and classic songs from the West End - and, yes, there will be some Gilbert & Sullivan in there too! What better way to celebrate the return of live Musical Theatre, than this toe-tapping medley of songs that will fill your heart with joy and love of the Theatre and everything that we have missed for the last 18 months?

Calamity can outrun and outshoot any man in Deadwood. Hard, boastful and desperate to impress, she travels to Chicago on the Deadwood Stage to recruit a star, Adelaide Adams. But things don’t go too smoothly for Calamity, as everyone in town favours the new girl and she struggles to keep her jealousy and pride in check. It takes her long standing enemy Wild Bill Hickock to make her see sense, and realise her Secret Love.

With an Oscar nominated score that includes The Black Hills of Dakota, The Deadwood Stage (Whip-Crack-Away), Just Blew in from the Windy City and the Award winning song Secret Love. 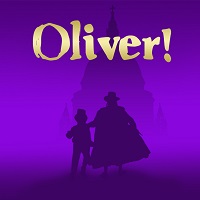 The Cotswold Savoyards proudly present one of the most beloved British musicals, Oliver!, vividly bringing to life Dickens' timeless characters with its ever-popular story of the boy who asked for more. The sensational score is full of Lionel Bart's irresistible songs including Food Glorious Food, Consider Yourself, You've Got to Pick-a-Pocket or Two, I'd Do Anything, Oom Pah Pah, As Long As He Needs Me and many more.

Iolanthe is a brilliantly funny, satirical fantasy, revealing a typically Gilbert & Sullivan topsy-turvy worldview. Based on W.S. Gilbert´s Bab Ballard, ‘The Fairy Curate’, Iolanthe is set 25 years after fairy Iolanthe committed the ultimate crime: marrying a mortal. Pardoned for her crime she begs the Fairy Queen to help her half-human, half-fairy son Strephon, to marry his beloved Phyllis. Unfortunately the evil Lord Chancellor wants Phyllis for himself, so naturally the fairies invade parliament so the boy can win the girl (and have a lot of fun with a few Peers).

Iolanthe is one of librettist W.S Gilbert and composer Sir Arthur Sullivan´s many comic operas. The Victorian duo were brought together in 1875 by theatre manager Richard D´Oyly Carte, whose Savoy Theatre was established as a showcase for their works. Gilbert and Sullivan are perhaps best known for their operetta´s, The Pirates of Penzance (1879) and The Mikado (1885). 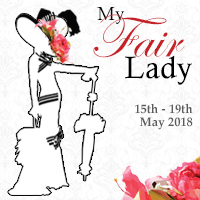 Winner of six Tony Awards including best musical, My Fair Lady sparkles with wit, elegance and romance, telling the story of an Edwardian cockney flower girl's transformation into the pride of London society. This beautiful production of My Fair Lady will transport you from the streets where you live to the flower markets of London, the racecourses of Ascot and to the glittering heights of an Embassy Ball where everything is 'Absolutely Bloomin' Loverly'.

Musical numbers include On The Street Where You Live, Get Me To The Church on Time, Wouldn't It Be Loverly, With A Little Bit of Luck and I've Grown Accustomed to her Face.

My Fair Lady is a jewel in the crown of the great musicals, written by Lerner and Loewe (Brigadoon, Camelot and Gigi) and based on Bernard Shaw's Pygmalion.

Meet Desirée, a one woman wrecking ball of love and lust who leaves a trail of broken hearts wherever she goes. Things are awkward enough as she starts an affair with old boyfriend Fredrik Egerman right under the nose of her current lover Count Carl-Magnus Malcolm, but when their wives Anne and Charlotte find out, things start to get REAL.

What's a girl to do? In Desirée's world the only thing to do is invite the whole gang for a weekend away with her family, throw in songs, banter, the mother of all parties and hope for the best. With everyone in one place, romance and the promise of second chances in the air, things are bound to work out right?

A witty story of love, lust and regret, Stephen Sondheim's elegant wordplay and musical mastery won four Tony Awards, and features the classic 'Send in the Clowns'. 'A Little Night Music' will fire your passion and leave you breathless.

For this one off evening a talented cast of young musicians together with members of the Cotswold Savoyards bring you an entertaining evening of much loved music from theatre and film including vocal numbers, instrumental solos, jazz and brass groups. The delightful presentation features popular classics and timeless favourites from West End musicals including Les Miserables, Phantom of the Opera, Miss Saigon, Chess, Oklahoma, Cats and Anything Goes.

The sheer enjoyment of music making shines through in the performance of these young people who are keen to benefit others through sharing their talent and have chosen to support the Acorns charity through this performance.

Established in 1988, Acorns Children's Hospice Trust is a registered charity offering a network of care for life limited and life threatened babies, children and young people and their families, across the heart of England.

THE PIRATES OF PENZANCE - BROADWAY VERSION

The story of "The Pirates of Penzance" follows a familiar Gilbert and Sullivan narrative of thwarted love, disguised identities combined with a gentle mocking of Victorian class and status.

Frederick, the romantic hero, is due to be freed from his bond to the ineffectual pirates when he falls in love with Mabel, one of the many "daughters" of the Major General. Unfortunately, Frederick is also loved by Ruth, an older character role. A band of less than courageous policemen are sent to apprehend the pirates who have captured all of the daughters and plan to do their worst and marry them! All ends happily when it is revealed that the pirates are indeed peers of the realm. "Joyous glee" follows with all characters suitably paired off.

"All men are fools, and what makes them so is lacking intelligence like what I have got!" believes militant blue-stocking Princess Ida, misandrist principal of the ladies-only University of Castle Adamant, where not even a cockerel is allowed to crow each morning to rouse the feminist undergrads. Some diplomatic small print, however, requires Ida to marry Prince Hilarion to honour a 20-year-old peace treaty with rival Castle Hildebrand. Will Ida defiantly remain prince-less, or will Hilarion finally graduate to married strife, sorry, life?

Gilbert & Sullivan's clever sideswipe at the influence of Charles Darwin and burgeoning women's education, uniquely couched in blank verse and driven by a sparkling music score, remains a deft battle of the sexes, giving an entirely new meaning to the term "University Challenge", whilst addressing all manner of obscure subjects. What is a gentle heigholet? What is the botanical name for a buttercup? Why is Lady Blanche such a misery guts? Is this opera really set in Hungary? Let the Savoyards enlighten you! 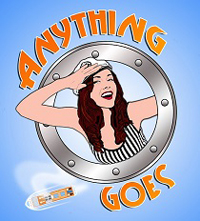 Billy instantly falls in love with a beautiful girl he meets in a taxi. When he discovers she's boarding the SS American the same London-bound ship his boss and co-worker Reno are boarding, he sneaks aboard himself. The beautiful girl, Hope, is engaged to stuffy British aristocrat Lord Evelyn, but that doesn't stop love-struck Billy. With the help of other passengers, Billy seeks to shake Reno, whose love he doesn't return, and capture the heart of the girl of his dreams, and all without hurting anyone's feelings.

This is one of Cole Porter's best musicals. It is light, frothy, frivolous, full of song, dance and will be a great company show. It is set mainly on board ship and has a wide range of characters from old(ish) to young(ish).

Stephen Sondheim's 'Follies' is an aching recognition of tarnished dreams and lost innocence, set during the reunion of a bunch of Ziegfeld-style hoofers on the eve of the destruction of the theatre where they performed 30 years previously. Full of complex ironies and memory 'Follies' is as much about the death of the American dream as any Arthur Miller play.

Its score – including 'Losing My Mind', 'I'm Still Here' and 'In Buddy's Eyes' – squashes the still prevalent idea that Sondheim can't write a tune. In its clever use of pastiche it's a love letter to Rodgers and Hammerstein, Cole Porter, Irving Berlin and all those other writers who made the musical one of 20th-century America's major contributions to the arts.

The audience will be haunted by the memory of a musical which brings past and present into collision on stage, placing slender young ghosts and middle-aged wobbling flesh side by side in an endlessly bewitching and unsentimental pas de deux of regret.

Maybe that is part of the greatness of 'Follies'. The less it is done, the more you want to see it. The further you are away from it, the more it ensnares you. The older you get, the more it speaks to you. 'Follies' plays exquisitely on the unreliability of memory and the transitory nature of theatre; it is a stark warning against the distorting dangers of nostalgia. But those of us who glimpse it are caught up in its spell and yearn to stop it vanishing through the cracks of memory.